Willie Hunter, the Order of Rechabites and Self Denial 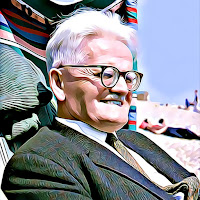 This is my grandfather, on a rare holiday and enjoying a trip to Southsea, probably in 1968.
Not exactly dressed for the occasion, but grandfather was from an era when suits were the standard attire for all classes whenever getting out and about... although for beachwear perhaps he was taking that custom a little too far!

That summer day was a scorcher.
It was not long before the jacket and tie were abandoned in favour of the emergency handkerchief sun hat. 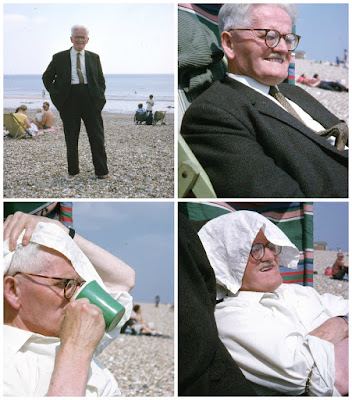 Over the past few days I've been sorting through long-forgotten family photographs and I came across the following which I thought I'd include in a blog post.
In this photo, again my father's father, William (Willie) Hunter, can be seen seated far left.
At a guess the photo was taken around 1920, very possibly in Lochgelly but certainly West Fife. 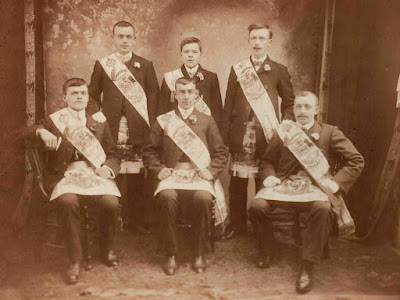 The Hunter family migrated to Lochgelly from Prestonpans around 1900.
They hailed from East Lothian coal mining communities. I've tracked down ancestral records dating back to 1765 in that part of Scotland and created a Hunter family tree which can be viewed online.
Willie Hunter was one of thirteen siblings.

My first thought was that those in the photo were members of a masonic order, but taking a closer it's clear that these are Brothers of The Independent Order of Rechabites.
That fraternal organisation, also known as the Sons of Rechab, was founded in 1835 and promoted abstinence from alcoholic beverages.
Their biblical motto being "We will drink no wine, for Jonadab, the son of Rechab, our father, commanded us, saying 'Ye shall drink no wine, neither ye nor your sons for ever'." 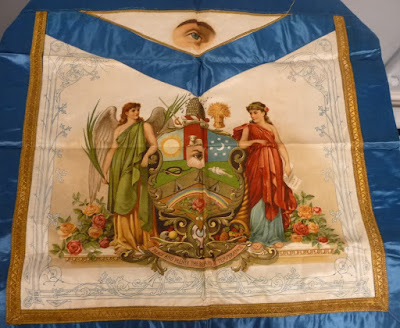 As with masonic orders there were initiation ceremonies.
Rechabites made the pledge...
"I hereby declare that I will abstain from all intoxicating liquors, except in religious ordinances or when prescribed by a physician. I will not engage in the traffic of them, and in all suitable ways will discountenance the use, manufacture, and sale of them."
My first thought was that those guys, having taken the pledge, were unlikely to have been the life and soul of any party.
Upon reflection, given the miseries brought about by alcoholism to families already enduring abysmal working and living conditions, it's not hard to understand why temperance organisations were so widespread in the 19th and early 20th centuries.

Rechabites also encouraged people to save by paying into a fund upon which they could draw in times of need. A kind of insurance plan.
My grandfather ran such a scheme for many years when working and living in Crombie (by Dunfermline).
In fact "Pop", as he was known within the family, was tempted by the occasional bottle of stout while on holiday or when celebrating special occasions, such as that of his second marriage at the age of 78.

With further rummaging I rediscovered another old photograph.
I can recall being told that they were most likely family members but I've not been able to identify them. 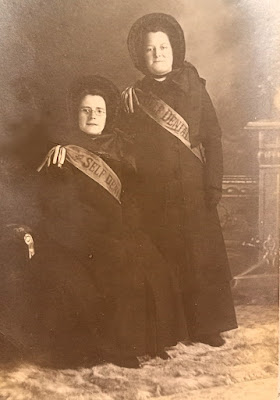 These formidable ladies clearly embraced the virtues of temperance and self-denial... and perhaps inspired their own menfolk to keep out of the pub and overcome the evils of drink?
Good on them!