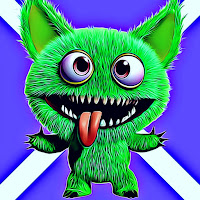 The creation of this blog during isolation has been a welcome escape from Facebook which has become an increasingly grim and unpleasant place to visit.
I rarely use Facebook these days but recently logged in to retrieve a few photographs.

It didn't take long before I came across a Facebook 'friend' denying the very existence of the pandemic.
It beggars belief that anyone can still seriously suggest that it's all been a big hoax, some kind of cleverly crafted conspiracy. Others play down the seriousness of infection or dispute the effectiveness of the vaccine.
No doubt there are those who have genuine misgivings about vaccination, but I think many are simply attention-seekers routinely disposed to taking bloody-minded, contrary views.

Quick rant on what I dislike about Facebook...
Unfortunately in Scotland much of the Facebook bile is spawned by those intent upon fanning the flames of extreme nationalism. Anglophobic trolls, consumed by hatred, harass anyone who doesn't fully embrace their thoroughly unpleasant views.
Scotland in my lifetime has never been such a divided and unfriendly country as it is today.

Of course Facebook can prove useful for keeping in touch with genuine friends and members of groups, but like much of social media it also provides an unwelcome insight into the fantasy world of some very unpleasant people.

Do you think Facebook is toxic?
Do you agree that Scotland has become a deeply divided and intolerant nation?