Carrion Crows and Wood Pigeons Nesting in my Garden 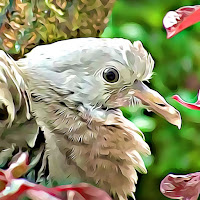 In the summer of 2009 wood pigeons nested in my front garden.
That's not remarkable of course, but on this occasion they chose to nest in a small cherry tree only six feet from an upstairs bedroom window.
The arrival of the pigeons coincided with my purchase of a video camera and was the perfect opportunity to test it out.
I set up the camera only inches from the slightly open window.
The quality of the video (in terms of clarity at least) is excellent.
The episode remains strong in my memory as my mother's bed was sat adjacent to that window.
She was bedridden and her dementia was by that stage severe.
Although mother had lost her speech I was aware that she was intently watching and listening while I filmed and contributed an Attenborough-esque commentary.

This is the video.
The camera was a Canon HG20.
I uploaded the video to YouTube in August of 2009.
It has accumulated over 16,000 views.
There was a sequel but it failed to achieve the acclaim of the original movie.

In my small back garden there's a 60 feet tall sycamore, much to the dismay of neighbours.
I've not told them, but I planted it as a sapling when a boy in the mid-1950s.
Admittedly it's a bit messy and forever shedding or dripping something or another. 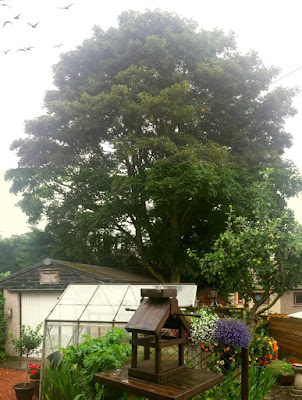 You'd think that tree would be a safe refuge for wood pigeons, but it has for decades been commandeered by nesting crows.
The crows are obsessively and violently anti-pigeon.
In fact they'll predate on any small birds attempting to nest within their territory.
Thanks to my supervision and assistance the sycamore crows have been able to rear countless chicks!
Every summer, without fail, at least one chick will launch itself from the tree without the slightest notion of how to set about flying.
My duty is to keep watch and return those fledglings to safety.

Further posts to follow about garden wild life.
Your reactions and comments are welcome.