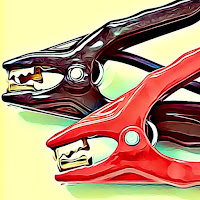 I've previously written about my 2007 Suzuki Jimny and explained why I think it's such a great little vehicle.
In this post I give an account of how the starter battery was rejuvenated by a 'smart' charger and take a look at the brands and specifications of battery which can be fitted to this model of car.
One cold February morning in 2021 my Jimny refused to start.
The engine failed to turn over and it was clear that the battery was the culprit.
To be honest I felt a little guilty.
The car had been garaged almost continuously throughout the first year of the coronavirus pandemic and had been started only once each week when it was allowed to idle unattended for 20 minutes or so.
Several days of temperatures below zero had been the final straw.
I reckon that the seven year old battery had done remarkably well to last as long as it had under those circumstances.

The outcome was that I would have to purchase either a battery or charger.
Fingers crossed, I opted for the latter.

It had been many years since I'd last been in need of a battery charger. 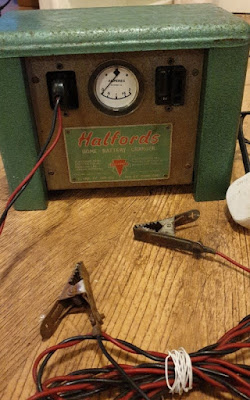 I have memories of peering into grubby old batteries as they bubbled and spat out electrolyte, while forlornly hoping that by being 'on charge' for days upon end they would somehow be resurrected.

The technology has advanced since those days.
I checked online and within seconds Google had introduced me to smart battery chargers.

I was informed that these intelligent little guys possess an array of 'charging modalities'.
Great stuff!
I gathered that during the charging process they will switch to a period of evaluation and work out the best way to deliver a full charge.
Unlike the vintage charger above these smart operators apparently know exactly when to stop, so there are no worries that an overlong charge will cause damage.
They are also said to be able to rejuvenate deeply discharged batteries.

It is well known that batteries will badly deteriorate if insufficiently charged over long periods in cold temperatures.
However a smart charger is said to automatically adjust the charging rate depending upon ambient temperature and so ensure optimum charge no matter the weather conditions.
That should keep my battery in tip top condition and extend its life.

I was sold on the idea and purchased a CTEK MXS 5.0.
Here it is in situ. 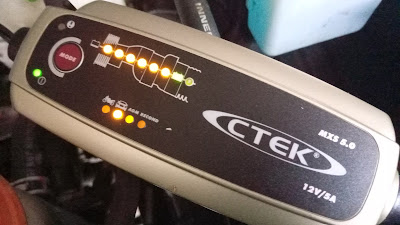 After five hours the battery was declared fully charged.
A lit up error lamp would have indicated that the battery was sulphated, or that it was unable to accept or keep a charge. Thankfully it was in good health.
My battery was not deceased. 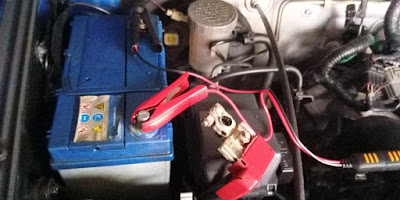 The battery in my Jimny is a Bosch S4022.
I got to wondering if that make was still on the market and which others would fit my car.
The internet provided the answers.

A number of batteries with the following basic specifications were found to be suitable... It is of course wise to check very carefully before making a purchase.
Order the wrong left/right configuration for example and cables may be unable to reach the terminals.

The majority of websites selling batteries have an option to enter your vehicle registration number.
Recommended batteries will be listed.
Here's a selection of the batteries which popped up when I input my car's details. 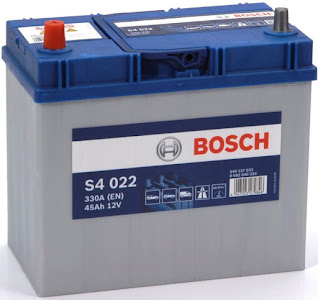 Bosch's S4022 Car Starter Battery is indeed still being manufactured and is one of several brands which fit the Suzuki Jimny.
I'll probably purchase this same Bosch battery when a replacement becomes necessary. 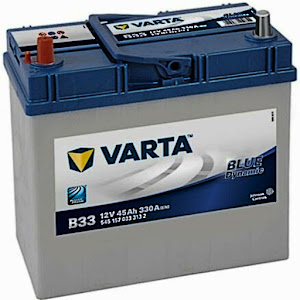 The Varta B33 Blue Dynamic Battery bears a striking resemblance to the Bosch.

That's unsurprising as both brands are apparently manufactured in the same factories in Europe.
There are no significant differences between them.
Likewise prices appear to be very similar. 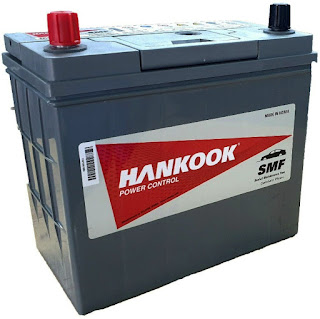 The Hankook MF54551 Starter Battery is manufactured in South Korea.
They are less expensive than other brands listed here. 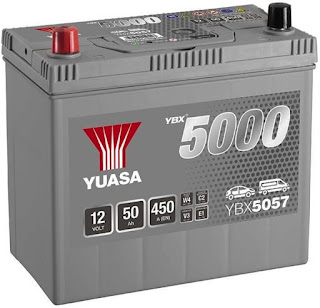 That's far from an exhaustive list.
Halfords is a popular supplier and they sell their own brand as well as a selection of others.
Their batteries are noticeably more costly than many online equivalents, but customers may wish to take advantage of the Halfords fitting service.

The batteries mentioned above are intended for a Suzuki Jimny JLX Plus (2007).
It is important to be sure that purchases made online are suitable for your car's model and year.