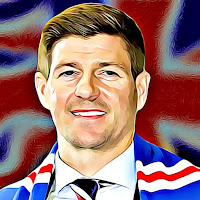 In March 2021 Rangers Football Club became Scottish Premiership Champions.
Scotland's greatest football club have now won a record-breaking 55 league titles.
In fact, since their formation in 1872, Glasgow Rangers have accumulated more domestic trophies than any other football club in the world.


It has been a difficult decade for Rangers fans, but we are back in our rightful position as the dominant force in Scottish football.
Rangers clinched the league title this year without losing a single game, whilst over the past two years in Europe the team has proven superior to the likes of Benfica, Galatasaray, Young Boys, Standard Liege and Porto.
The triumphant return of Rangers would not have been possible without the leadership of Steven Gerrard... not only a legendary player for Liverpool and England but now a football manager destined for greatness.
Rangers are fortunate to have such an inspirational figure at the helm.

From time to time I've enjoyed creating GIFs for use on social media platforms such as twitter.
In celebration of the mighty Rangers I've put together these animations.

The next GIF can be edited to include a personalised text of your choice.
The text coloured 'grey' can be replaced with anything you wish.

You might want to include your name, a message or a photo?
Just let me know what you'd like added.

Any of the images can be removed if you want to include only specific players.
No doubt more photos of players will be inserted over time.

The customised GIF might look neat pinned on your social media pages?
Of course these animations are created free for Rangers supporters.
Use the contact form at the foot of this blog page to provide details of what you'd like added.

Here are a couple of examples of personalised GIFs.
The first has text added... the second shows an image of a famous Rangers fan.
Your photo can be included (head and shoulders) if it's of good enough quality.

Rangers Fan "Mike Tyson"
I'm currently creating even more Rangers animations.
For example this little video on YouTube celebrating the Teddy Bears Picnic...
In addition, GIFs are being uploaded to websites such as gfycat.com, giphy.com and tenor.com.
This means that the animation can be selected to view when posting on Facebook and Twitter.