HMS Hermes, Horse's Necks and a Jolly to Gibraltar 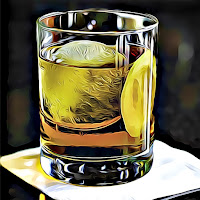 In the mid-1960s I was aboard HMS Hermes sailing to Gibraltar.
Photographs taken at that time appear elsewhere in my blog.

As for my being on that ship, it was because I was employed by the Ministry of Defence as an armament supply officer and the authorities in their wisdom elected to send me on a jolly to Gibraltar.

Apart from getting under everyone's feet taking snaps I was introduced as a guest of the Royal Navy to the favourite wardroom cocktail.
The Horse's Neck. 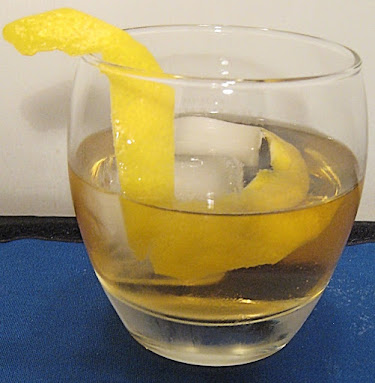 The cocktail originated in America towards the end of the 19th century.
As consumed by officers of the Royal Navy it consists of a mix of brandy and ginger ale over ice.
Ideally a long strip of lemon peel should protrude from the glass.
That gives the drink its name.
Angostura bitters are optional.
The Royal Navy has long entertained wardroom guests with this drink.
As evidence of its historical popularity, reference is often made to a scene in the film Yangtse Incident in which an officer is seen to order a horse's neck.
The film told the story of HMS Amethyst in 1949 when caught up in the Chinese Civil War.
I was disappointed to read that in 2010 the UK government decided that the cocktail party tradition must be curtailed as part of the austerity measures needed to reduce MOD expenditure.
Understandably senior officers of the Royal Navy were less than happy and argued that parties were important to British policy abroad.
It was said that invited dignitaries and other guests were placed at ease and became more amenable within the informal surrounds of the wardroom. Also unattached ladies invited to cocktail parties substantially raised the moral of the crew.
What remains nowadays of that party tradition and the diplomatic role of the horse's neck I couldn't say.

There is perhaps another reason to enjoy a horse's neck aboard ship.
Each of the main ingredients is said to combat stomach upsets.
It has long been believed that brandy aids digestion and indeed has multiple medicinal benefits.
Ginger ale has likewise been put forward as a remedy for stomach complaints, even though the ginger content of Canada Dry, Schweppes and other popular ginger ales has been called into question.
Angostura bitters were originally promoted as a cure for sea-sickness.
So perhaps the horse's neck is the perfect alcoholic concoction for the seafarer?
Have you enjoyed a horse's neck?
Does this continue as a Royal Navy tradition?
Do share this article or add a comment.