Biennial Plants and Sunflowers From Seed 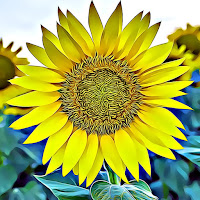 For many years I've enjoyed a spot of gardening.
In fact there have been several occasions over the years when I've been employed as a gardener.
That's included both in Scotland and when living in the Northern Territory of Australia.
I also studied plant biology as a component of my BSc degree in 1985 at the University of St. Andrews.
Having said that, I'm by no means an expert but do try to grow a variety of different plants each year.
Unfortunately what can be achieved in my Dunfermline garden is limited by its small size and difficult location.
An enormous sycamore tree at the foot of the garden, which I've pictured elsewhere in this blog, hardly helps my efforts.

I generally sow biennials indoors on window sills during June and July.
I have a greenhouse but it's more convenient to attend to a small number of germinating seeds in the house.
Seedlings are potted up and transferred to the greenhouse after a few weeks of growth.

The small Lupins plants in the photograph were placed outdoors for a short time, but were eventually returned to the greenhouse where they remained until the following spring. 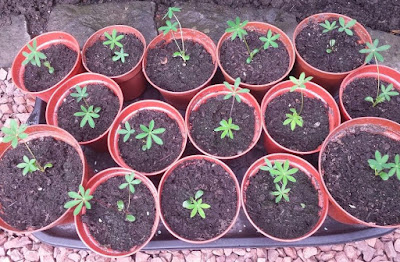 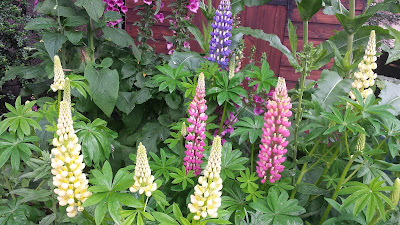 The Lupin blooms were disappointing.
It's wise to buy seeds from a trusted supplier in the hope that whatever springs up bears at least some resemblance to what's pictured on a seed packet.
As a very small boy I can recall my grandfather growing Russell hybrids in his garden in Fife.
Those Lupins were allowed to self-seed year after year and the resulting plants became progressively less colourful.
He eventually dug the lot up.
The capture of foraging bees in a jam-jar was a serious competitive sport when a child, so I was less than happy.
A snag with Lupins is that they fall victim to many garden pests, from slugs to field mice. The latter managed to tunnel into my greenhouse and snack on the tender growing tips.
Lupins are not troubled by the cold Scottish climate, but those in the photograph did become exceptionally straggly after flowering. That was probably due to the shady location.
The Foxgloves were more successful.
The seeds were sprinkled over compost in a tray and left uncovered.
That was probably a mistake as the compost tended to dry out and the tiny roots struggled to penetrate the soil surface.
Some germinating seeds were consequently lost. 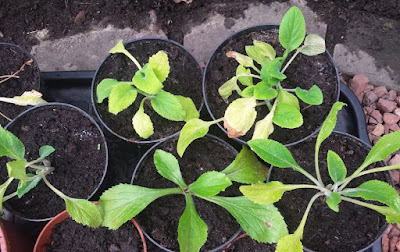 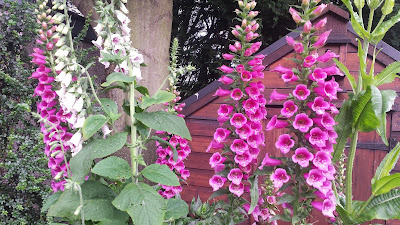 The Foxgloves were tolerant of the shade beneath the sycamore.
They are after all plants of the woodland's edge.
The plants were visited by several species of bumblebee.
That was handy as few other plants which attract insects were flowering in my garden during June of that year. 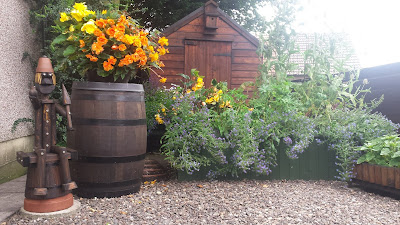 The blue Viper's Bugloss plants pictured overhanging the edge of the raised bed were outstanding.
They were also grown from seed and over-wintered in the greenhouse.
It is a native British biennial and a tremendous attraction for bees.

I believe that Viper's Bugloss plants generally grow more upright than those in the photograph. At least that's what an online search suggested.
Possibly the trailing growth is a consequence of poor light?
Nonetheless those plants were vigorous and long-lasting. 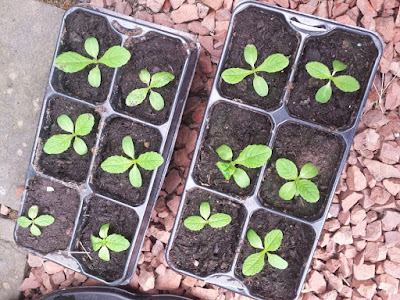 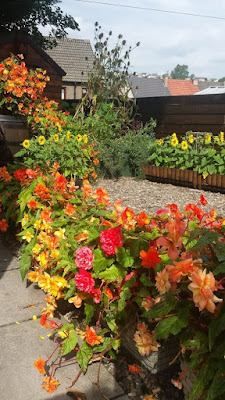 Teasels (centre/top in image) also attract insects and are another biennial easily grown from seed.
Two years on and the plants continue to self-seed throughout the garden.
Insects collect in the water which fills the cups formed by leaves around the Teasel stem as you'll see in this short video clip made on my mobile.

It's probable that the insects provide nutrients and the plant can be regarded as carnivorous. 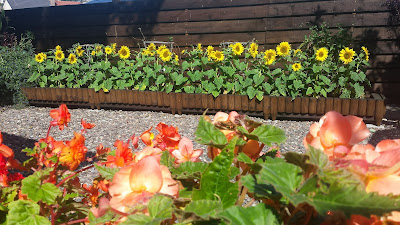 It's hard to go wrong with annual Sunflowers.
Those pictured were a dwarf variety. The seeds were sown in my greenhouse in May.
In Scotland, with cool summers and limited sunshine, it can be approaching Autumn before they bloom.
That allows little time for the seeds to develop before the first frost.

The plants in the Sunflower 'hedge' were grown in pots.
I think the log border edging, which I secured to a single wooden framework, makes a neat surround. 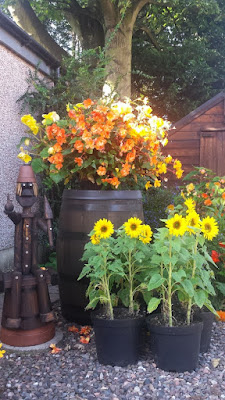 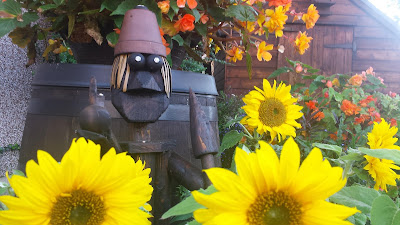 Above, more Sunflowers with tuberous Begonias.
There were three Sunflower plants to each 28 cm diameter pot.
Watering was necessary at once least daily to avoid wilting.
That's a 40 gallon (88 cm tall) refurbished whisky barrel, which gives an idea of scale.

In case you're wondering, I cobbled together that elegant garden ornament using discarded tree stakes, stainless steel coach screws and old flower pots.
I routinely paint all wooden garden structures (sheds, fences, etc) with Creocote.
That's the substitute for creosote which these days, for safety reasons, is only available for purchase by trades-people.
Whether Creocote is equally effective as a preservative only time will tell.

One final plant is worth a mention.
It is the old-fashioned, biennial Honesty (Lunaria). 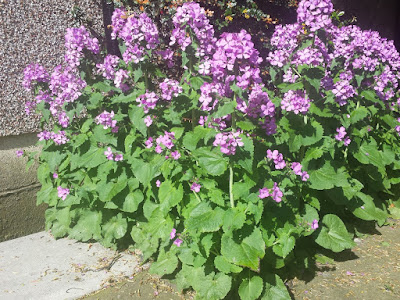 Those plants have been self-sowing in my back garden for as long as I can remember.
Situated below the sycamore tree and adjacent to a garage wall, they are as tough as old boots.
Neither the shady location nor the severest of Scottish winters has hampered their growth.
Do you enjoy a spot of gardening?
Your comments are welcome.